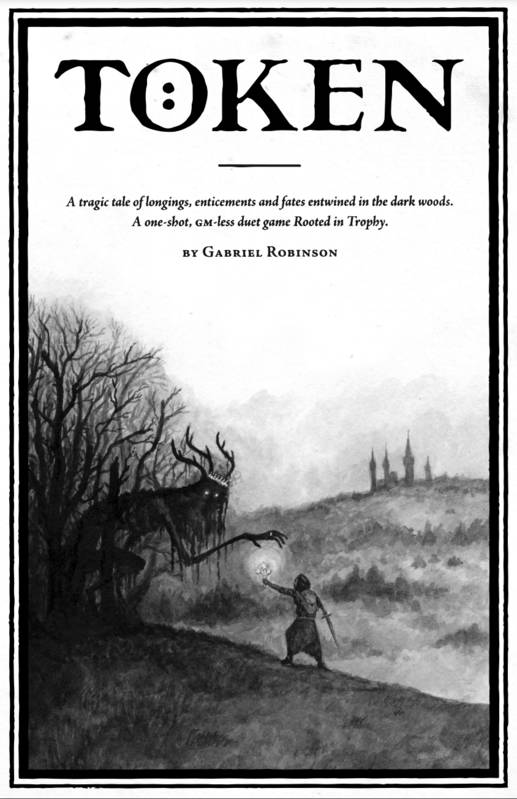 he Game
TOKEN is a collaborative game Rooted in Trophy: using a rules-light, narrative-rich framework to encourage risky choices, and evocative storytelling.
TOKEN is GM-less, meaning both players take turns making rolls, describing the world to each other as their characters face challenges.
Both characters must balance the risk of losing themselves with their drive to find the other, while keeping the threats of the Forest at bay.

The World
Players collaborate to create a dangerous landscape looming with horrors, then set out in search of each other, facing challenges and discovering strange new features of the environment along the way. A series of tables expands the setting beyond a Forest, if you choose.

For example, you might set the story in an expanse of snowy peaks, haunted by spirits of lost travelers or a deep marsh, polluted by futile wars, crawling with restless dead.

The Characters
Character creation in TOKEN is simple, using a series of expanded tables to choose the Past that haunts you, your Identity (for the Seeker) and monstrous Features (for the Dweller). Both characters have a driving Instinct (a motivation for seeking the other), which changes throughout the story and is finally acted upon during the game's epilogue. Scars are the manifestation of physical injuries gained during the journey or emotional wounds from the past. Charms are dangerous magic powers which both characters may use. Finally, both characters have a Secret about their shared past which is revealed during the final scene if the gameoffering a final dramatic chance to influence how the story ends.

A Seeker with a family curse, who is an Elder, Fighter, and an Outcast, seeking to slay the monster which haunts the woods to put an end your family curse.
A Dweller who once was a lost hunter, now Ancient, Ravenous and Many-Limbed, seeking to reunite with your long-lost kin so that you may look on the beauty of the world outside.

TOKEN adapts the dice rolls from Trophy Gold and adds a new mechanic of its own. Dice rolls may result in the player gaining a Token, acquiring a Scar, or increasing the threat of the Forest:

There are 3 ways the game can end: