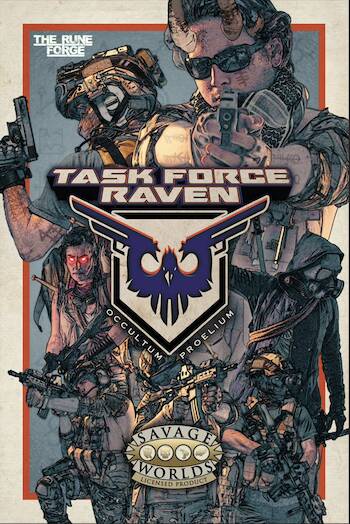 Task Force Raven asks the question, how would a team of Tier 1 Special Forces Operators conduct missions against occult targets. With this field manual, you’ll find how to best answer that question. Create your operators, gather intel, and get the mission accomplished. We cover everything you’ll need to kick ass against a wide variety of cryptids and human monsters. Good hunting Raven. And stay frosty.

The primary concept and conceit of Task Force Raven is that you play a professional warrior, a member of the Special Operations community. And you will be deployed into dangerous locations, meet dangerous people, and begin to fight against what can be termed, occult, events. We include several archetypes for you to give an idea of what an Operator looks like, mechanically and with some narrative, and also enabling you to use them for rules learning quick play.

Well, you made it to this page and halted, glad to have you onboard! If you asked, “What the hell is Task Force: Raven," again, good to have you, that’s the type of forward leaning warrior we look for in recruitment. So, what is your role while assigned to Raven? The answer is in our motto: OCCULTUM PROELIUM, “The Hidden Battle." Short answer, we undertake those missions of high value but minuscule intelligence in the most remote and denied areas of responsibility.

Long answer, the world is far more dangerous than 99.99% understand, and even among the best of the best, including those read in to the highest special access programs, there is little knowledge of the issues needing to be confronted. Cults, cryptids, and conflagrations; RAVEN was born in late 2002 after the events of Operation MOUNTAIN BREAKER, otherwise known as, 'The Giant of Kandahar'.

In 2002 the Joint Intelligence Center in REDACTED, Afghanistan received intelligence from a known source on the possible location of WMDs or likely WMD-components; MASINT vetted intelligence, though the signatures located could not be specified in any report. A decision was made to deploy a small cadre of SOF elements, with the primary insertion made by members of the 75th Ranger Regiment, ordered to take the valley and clear the way into the deep ravine indicated as the primary objective. This was followed by elements from Task Force VIOLET, chiefly a mix of Special Warfare shooters, PJs, Combat Controllers, Ground Branch, and other clandestine collection operators and analysts.

The Rangers arrived on site and rapidly seized the village and vulnerable pathways up the ravine. Shortly after, they proceeded to relay HUMINT to the inbound little birds, piloted by the 160th SOAR, indicating heavy resistance in the ravine and mountains. This was translated, loosely, as “righteous fire”, thought to indicate AQ presence. This was the first of several mistakes.

TF VIOLET video relayed a scene of massive and storied destruction. Weapons and military gear from U.S., Soviet, UK, and even more ancient cultures lay scattered throughout the ravine, though no human remains were found. After a short pause, the TF was ordered to continue forward to the target lat/long. And that is when they found the cave.

Commencing with an animalistic scream, the massive form of a human, easily twice the size of a normal man in height, burst forth with a crude spear in hand and dressed in what later was identified as the skins of animals and humans. A shooter from Delta was the first to fall, impaled and leaving a hole the size of a telephone pole in his chest. The TF was now in a direct action mission, with orders to bring the “giant” back at all costs. After a prolonged and moving firefight, the beast was killed and the corpse airlifted back to a classified location. Of the dozen or so combatants, only three remained from TF Violet.

The survivors were debriefed by multiple intelligence partners and became the founding members of Task Force Raven.

VAMPIRES IN IRAQ, GIANTS IN AFGHANISTAN, JINN IN YEMEN AND RED MERUCRY.
Task Force RAVEN uses the Savage Worlds rules to answer the question, who's more deadly, Special Operations or a vampire countess? Or a jinn. Or a banshee. Or...well, you get it. And you'll get to answer that question, one bullet, one horror at a time. And as with all Savage Worlds settings, we bring a few new things to bear: Roles, Setting Rules, Edges, Hindrances, and a guide to the Hidden World.

THE ROLE: OPERATORS
Every player creates their character, referred to as an Operator, but these represent the pinnacle of military training. To effect this, in addition to the normal common skills, each Operator also begins with a starting value in Battle, Fighting, Shooting, and Survival. You'll also add a few more background items, to include your DD214, representing the life you left and are likely to return to if you make it to end of your contract.

Every Operator also begins with their Basic Kit, a selection of various weapons and gear, based upon your role within the team. And finally, there's a built-in group exercise to determine each Operator's nickname; you don't choose a nickname, you earn it. Oh, and there's also the team K9, with a variety of training options, depending on the nature of the mission.

NEW HINDRANCES AND EDGES
Part of the charm of any Savage setting are the hindrances and edges, and we bring both, in spades. We won't go into their mechanics here (yet), but there are 5 new Hindrances and 15+ new Edges. And every one of them is designed to tightly focus your Operator’s role and capabilities.

SETTING RULES
TF RAVEN also brings 5 new Setting Rules, and while we are teasing you, we can say that a few of them change they way you'll see a Raise on a Trait roll; sometimes, a Raise is more than a Raise. And we make the two-way range deadlier. You'll need to use all of your skills, abilities, and planning to make it in Raven.

WHAT ELSE?
The book also covers the Hidden World, discussing the occult, cryptids, monsters, over a dozen cults and anything else considered super or preternatural; all in full compliance with the SWADE Fantasy Companion. Additionally, you'll get a mission generator, a field manual on how to run a game of Special Operations, a bestiary of over 50 real-world monsters to meet and test yourselves, an example Quick Reaction Scenario (Operation THUNDER OAK), a handful of sample Wild Cards and Notable Personas, and a glossary of the lingo used in the military, SOF community and occult communities.

WORLD-WIDE REPRESENTATION
The book is presented in such a manner that you can play Tier 1 equivalents from anywhere in the world. Delta? Check. Vympel? Konyechno. COPESP? Sim. No matter your home team, we're all in this together. #SendMe.