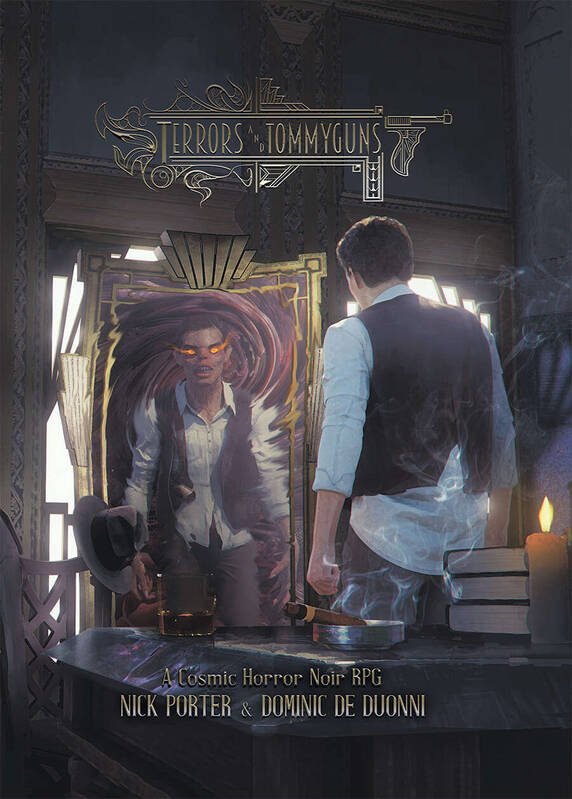 At first glance, New Babylon feels like any other city coming out of the shadows of The Great War. It’s got the same corruption, the same speakeasies, the same jazz clubs and scumbags and would-be heroes. But there’s something lurking just underneath that veneer. An unnerving shadow that doesn’t match its source. An echo down an alleyway that sounds otherworldly. A feeling that the people you’re speaking to are not who, or what, they appear to be. The world of New Babylon is indeed a strange and mysterious place, but the veil has been pulled back for you. As a member of The Collective, you are one of the auspicious few who can both see and manipulate the Eldritch threads that seek in turns to bind the world and tear it apart. What role you’ll play in the machinations of the great powers that bind and control the world are up to you. The world, both natural and supernatural, are yours for the taking if you can be strong enough, lucky enough, and shrewd enough to survive.

Welcome to New Babylon! Terrors and Tommyguns is a cinematic take on cosmic horror blended lovingly with old film noir and served dry and dirty with a few olives to boot (NOTE: OLIVES SOLD SEPARATELY). It takes place in the eponymous, sprawling city of New Babylon.

The technology level is 1920s– there are tommy guns and radios, but not televisions or cell phones. Blending the feel of pulp noir with the unpredictable, chaotic feel of cosmic horror, players will assume the role of members of The Collective, a loose-knit society that exists in the underbelly of New Babylon. Will they be a hardened detective, taking on supernatural as well as mundane snooping jobs and wet work? Will they let themselves be lured in by the Old Gods, trading their loyalty (and their sanity) for power? Will they seek to bolster the ranks of The Collective, seeking to learn the motives and origins of its mysterious leader, Lux Hammersmith? Although the Collective has lofty goals, it also protects the worst of New Babylon’s occult denizens. For those unlucky souls chosen for it or incidentally exposed to it, membership in The Collective is neither comfortable nor easy and there is only one way to exit The Collective– a permanent dirt nap.

The Terrors and Tommyguns Corebook contains everything you need to unravel the mysteries of New Babylon:
• A simple, intuitive rules system that values and encourages player creativity and allows the rules to service the story rather than the story existing to service the rules
• 16 Character “Jobs” with tools to create your own unique role in the world
• 24 Character Skills and 60 Talents to ensure your Character is the real Cat’s Meow
• Tons of weapons, armor, spy equipment, and vehicles to help you fight the things that lurk beneath the surface
• A guide to the secret society known as The Collective, including 12 powerful Incantations that can be used to solve a mystery, turn the tide of battle, or level a city block. Whatever you’re into.
• Rules for establishing a Headquarters for your Characters, with 21 upgrades that grant static bonuses.
• 12 Castable Eldritch Rituals and 8 Artifacts to help Characters reshape (or unmake) the world, with rules to create your own
• 35 fightable foes, from shapeshifting rats to manipulative shards and everything in between
• A pre-written adventure to help you find your footing in the world of New Babylon
S'identifier pour envoyer des commentaires.