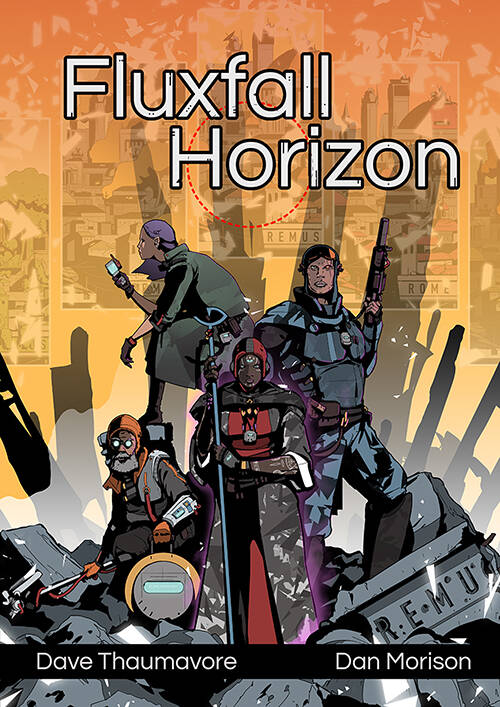 Fluxfall Horizon is a Powered by the Apocalypse RPG involving players who "lance" or jump from parallel Earth to parallel Earth, originally starting from an ultra-tech future and wrestling with both local problems as well as secret personal objectives.

- World is always changing: At the heart of the game is the conceit that Lancers are using quantum disentanglement equipment that is harming the Continuum, a sort of living, breathing omnipresence. And each time the Continuum is harmed, the Lancers are forced to an adjacent parallel Earth, one where most of the details are the same but some... aren't. This kaleidoscope of worlds is the harsh new reality for Lancers.

- The Put Right: There is a way to heal the Continuum, and that is to solve one kind of problem or another. Referred to as a "Put Right," this team goal can improve the version of Earth that lancers find themselves on, and possibly give them a shot at returning Home.

- Secret Objective: Each Lancer harbors their own secret goal, and by design it is at odds with those of other and possibly the Put Right as well. The mechanical reward for fulfilling this objective is character advancement, which is not necessarily a concern in one-shot play. But as far as one-shots, survival and the Put Rights should be more than enough to occupy players.

- Gear, Specials and Conceits: The game also features smaller mechanics that affect what would otherwise be vanilla PbtA structure. Basic gear is anything and can be easily acquired, within reason. But Special Gear offers one kind of material advantage or another to a Move roll. Specials and Conceits are further mechanical mods that are specific to the playsheet.

- Quantum Powers: Certain roleplay triggers, which differ for each character Type, earn Disentanglement points. Enough of these points will unlock stat upgrades and Quantum Powers. Quantum Powers are supernatural powers that Lancers wield to to do a number of different things like phase through matter, create illusions, intuit secrets, heal others or cause harm.

The year is 2390 where your lancers begin, and the world is a mostly peaceful place. Fluxtech has been around for decades, but has yet to transform Home Earth, at least in any ways that are known to the general public. But as the five Factions share this technology and dabble in parallel worlds, no one sees what might be coming from beyond the quantum horizon. These external threats are listed in the Stretch Goals of this project, and are lightly detailed in the free PDF "Fluxfall Horizon: Timeline."

Any parallel Earths game where you spend most of your time in gonzo alternate dimensions is quickly going to leave your starting Earth way behind in the rear view mirror. What matters most in Fluxfall Horizon are what the lancers bring with them: their secrets and their psychological baggage in terms of how they view themselves (see doubles/doppels) and how they view certain others (see special connections).


So what is the point of a timeline of Home Earth, a long history of things that lancers will immediately leave behind? The historical details in this supplement are simply intended to provide a springboard for ideas. By having a backdrop of history (or at least a framework), a GM can hopefully be inspired to generate scenarios that have some connection to the technology, politics and history of a world that the lancers once knew.
S'identifier pour envoyer des commentaires.