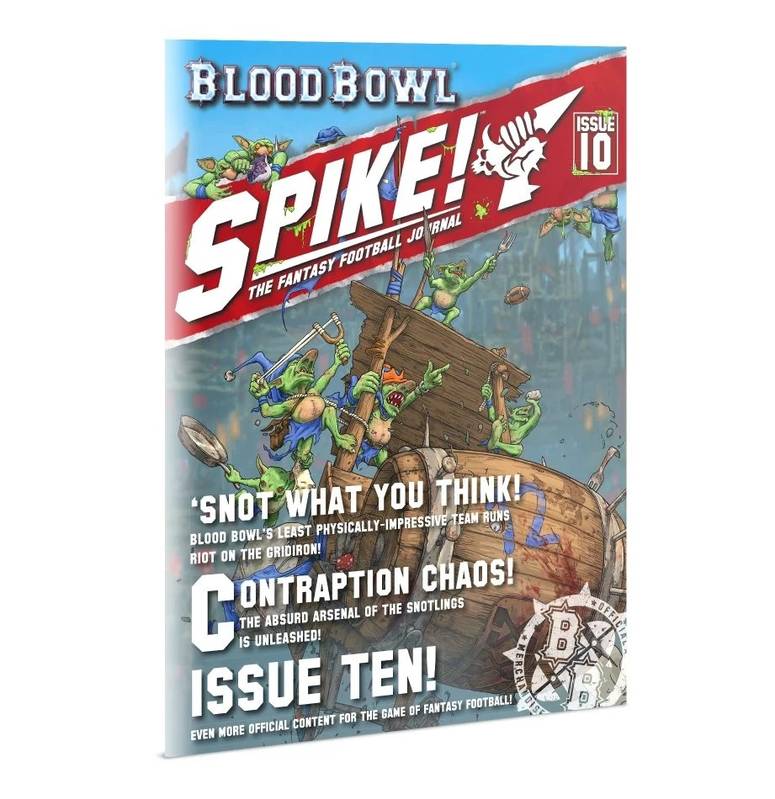 Guest editor Vic Tallsnot (who is, incidentally, definitely not three Snotlings in a fancy costume) is on hand to help us understand why Snotlings have decided to form their own teams, and what it means for the future of Blood Bowl.

All 36 hilarious pages of this issue of Spike! Journal are packed to bursting with all the rules and advice a budding Snotling coach will need to play the ultimate underdogs in your games of Blood Bowl.

– It’s Not Easy Being Green: the history of Snotlings in the game, as well as a breakdown of the major positionals – Snotlings, Fungus Flingas, Fun-Hoppas, Stilty Runnas, Pump Wagons, and Trolls

– Profiles of famous Snotling teams, including the Crud Creek Nosepickers, plus rules, stats, and profiles for Star Players

– Star Player Spotlight: Ripper Bolgrot – this shockingly intelligent Troll mounted a successful legal battle to get Ugroth Bolgrot banned from Blood Bowl! His accomplishments on the pitch are equally impressive…

– Dirt from the Dugout: Mindy Piewhistle digs into the current trend of hiring Snotlings at Blood Bowl stadiums, and the somewhat less-than-desirable outcomes of the practice

– Star Player Spotlight: Fungus the Loon – This Goblin fanatic was raised by Snotlings, and he cares not for whom he swings his ball and chain, so long as he gets to smash things!

– Chat with the Rat: Hackspit Quillchewer interviews Zibbit, an enterprising Snotling who has dedicated his career to improving the design of the Pump Wagon

– Small, but Significant: Extensive and much-needed advice for playing, and winning, with Snotlings

– Star Player Spotlight: Nobbla Blackwart – Goblins and Snotlings both have a penchant for levelling the odds through a bit of, well, cheating! This Chainsaw-wielding loony adds some much-needed ultra violence to a Snotling team.