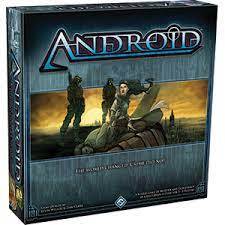 Set in the distant future, in the city of New Angeles and the Moon colony of Heinlein, Android is a board game that allows three to five players to take on the roles of investigators competing to either solve a case, unravel a conspiracy, or simply find happiness. These tasks take the investigators all across the Greater New Angeles region. Its cities are dangerous places, riddled with lurking threats and dangerous temptations. Players must weigh their options carefully as they scour the streets searching for leads, because one wrong turn could take them down a dark path from which they might not be able to return.

Players have to decide how much time they are willing to spend following up leads that might be out of the reach. Depending on what form of transportation they have access to, they have to plan their day carefully. If they are fortunate enough to have a dropship pass, they have quick access to any location in the Greater New Angeles region. However, if they have to rely on their own flight-capable vehicles, they have to spend more time traveling between locations, possibly forcing them to travel through “seedy” locations in the city: the areas most investigators prefer to avoid.
S'identifier pour envoyer des commentaires.