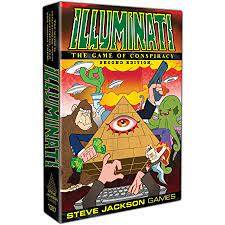 Second edition of the classic game of world domination, in which each player is a secret society attempting to spread their tendrils into special interest groups throughout the world.

The content and mechanics of the Second Edition have been revamped for the twenty-first century, dropping the Cold War-era Government/Communist alignments and adding a new alignment, Media, for the information age. The cards have been redesigned with cartoon-style artwork by Lars DeSouza, and updated to reflect modern political and social conflict: now the Russian Campaign Donors can work with Antifa to take control of Furries, or destroy the Hipsters.
S'identifier pour envoyer des commentaires.