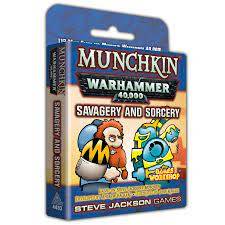 Munchkin Warhammer 40,000: Sorcery and Savagery is a 112-card expansion featuring one of the most iconic pairs of antagonists in the entire Warhammer 40,000 universe: Space Wolves and Thousand Sons.

The Space Wolves are an elite Imperial army, using genetic engineering and intense training to build a proud, deadly force. The Thousand Sons are the pride of Tzeentch, using sorcery to impose Chaos on the entire galaxy. Their battles are the stuff of legends and their heroes are revered millennia later. Now you can re-enact their stories.
S'identifier pour envoyer des commentaires.